Schools do a wonderful job of coaching children & their parents through the endless preparation list… when you are going into Kindergarten. But for moms like me, who head into a new school year unprepared, there is no coaching.

Popsicles on the Playground Two weeks before school, Callie & I received an event invitation from the PTA to a meet & greet with 3rd grade teachers & students. How fun!

After quite a bit of planning & dinner at (gasp!) McDonald’s, we arrived at the school about fifteen minutes late. The teachers stood in front of the crowd to quickly introduce themselves, and announced that class assignments would be  made by the following week. The parents began heading back to the parking lot. It was already over after twenty minutes after it began!

I decided to make the most of the opportunity & began asking a series of questions to the remaining group of teachers (an obvious indication of my recently acquired “PTO Mom” status). Thankfully they were gracious, & assured me that there are no stupid questions. I remembered that phrase from my own elementary school days & relaxed. The conversation went like this…

I decided I might not have any more questions, since surely they would be addressed at the upcoming event. Callie slurped the rest of her popsicle & we headed home.

Meet the Teacher The following week was a similar drill, & I triple-checked the school supply list to ensure I was bringing all the things. When we arrived at the school, it was a madhouse! Cars were parked on every curb & scrap of grass.

So. Many. People. To say that I don’t like crowds is an understatement- they also happen to be one of my triggers for panic attacks. I will share more on the challenges of living in a large city with this type of anxiety trigger in a few weeks.

After a few moments of deep breathing, Callie & I headed into the school to find out who her teacher would be. I never knew what a big deal this was, but apparently all of the “moms in the know” request the “good” teachers for their child before the previous school year even ends! Even going so far as to write letters to the principal with their requests. We had left it up to chance, but I couldn’t be happier with her assignment. It just so happened to be the teacher that I hit it off with at Popsicles on the Playground & had seemed to really take an interest in Callie.

Follow the Balloons The sign in the cafeteria said to follow the orange balloons to the 3rd grade hallway. I didn’t see any, but Callie was confident that she knew exactly where to go. We trekked through the maze of hallways: up the stairs, past her classroom from last year, and hit a dead end. Then, rriippppp! The paper bag holding all of Callie’s school supplies (plus extras since I was going for brownie points with the teacher…) ripped down the side and poured out into the floor.

As I gathered the supplies from the floor, I had a realization. Callie had no clue where the 3rd grade hallway was- and once I asked her, admitted that she had brought us up here just to get to wave at her old teacher. Oh. I managed to get everything back into the bag and hold it together enough to keep any more supplies from escaping as we marched back down the maze of hallways, back down the stairs, and right back into the cafeteria.

This time I asked an adult for directions. Once again we were headed to see Callie’s classroom, but this time we were going the right way. Past Pre-K, past Kindergarten, turn a corner, down the breezeway, and then- orange balloons! We had made it to the 3rd grade hallway, and eagerly looked at each door in hopes of locating her new teacher. The very last door was hers. We finally made it!

I handed over my battle worn bag of school supplies & explored the room with Callie. She was so excited that she got to pick out her own desk for the year! 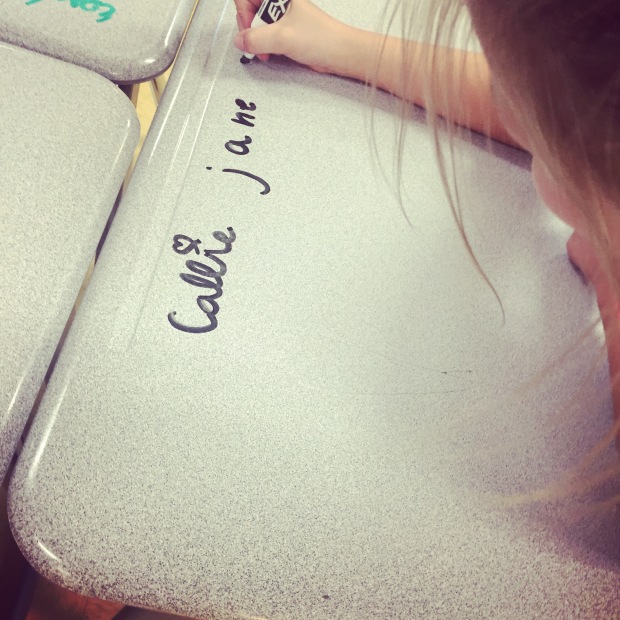 The First Day of School We pulled into the school drive about 5 minutes before the bell rang. Again I noticed that there were cars parked all over the grass and to the side, but didn’t give it much thought. I convinced Callie to let me take a quick photo as she jumped out of the car, and we parted ways.

I started to panic- Callie has been nervous as it was and now she would feel unloved! I stressed the entire day about what I would say to her when I picked her up from school. Turns out, she didn’t notice. Not at all!

Callie had a wonderful time meeting new friends & was perfectly happy with every single detail of her first day.

As I felt the relief wash over me, I couldn’t help but chastise myself for comparing myself to others just like I am always telling her not to do!

The most important thing I learned while getting my daughter ready to go back to school? Easy.

Our kids don’t care if we have all the answers, & they don’t care if we know exactly what to do all of the time. They care that we love them & show up for them. Of course, it doesn’t hurt to have a few laughs along the way! 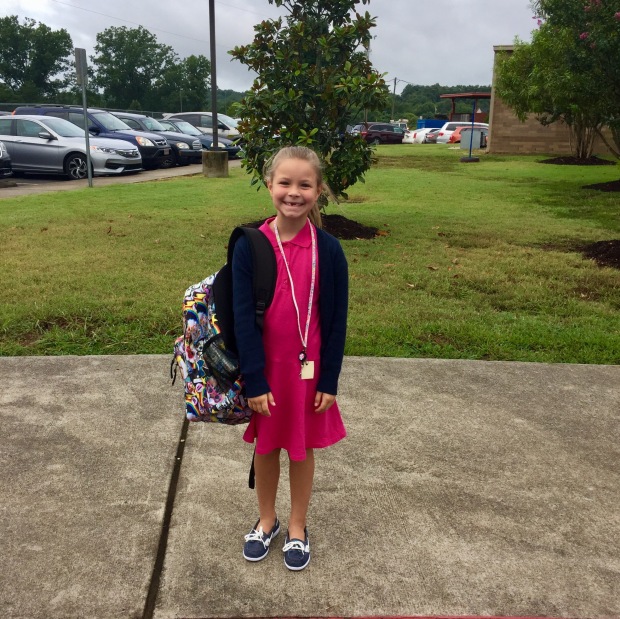